How not to do a follow-up sales call (and is Mary Kay any good?) 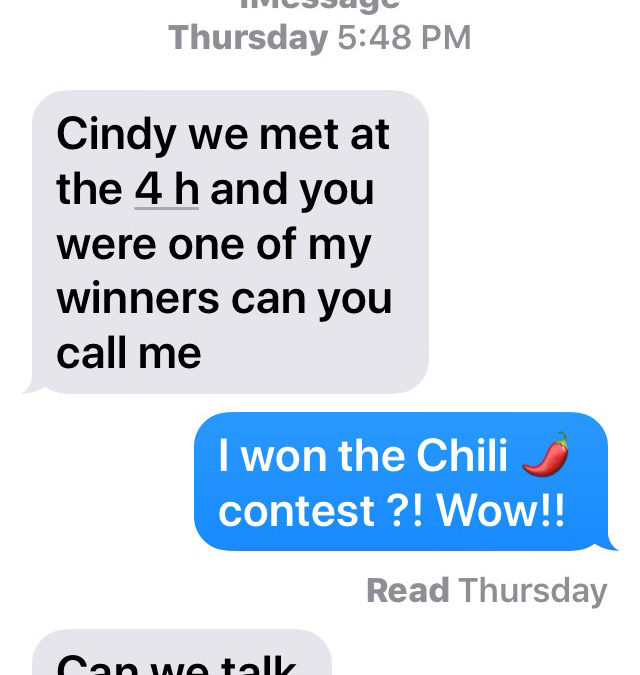 When I recently got this mysterious text, my brain immediately went to a chili contest I entered (and lost) with my husband sponsored by the 4H Club. I impulsively answered the text with a chili pepper, because I’ve always wanted to use the chili pepper emoji. In my mind, for a split second, it was plausible our chili was the best after all. Maybe the judges had finally come to their senses!

I quickly concluded it was likely a spammy sales text. I get more calls and texts from people I don’t know than from people I actually do. But the lure of a prize was too tempting to ignore. I have won great prizes in my life, from a bike when I was eight to a Vegas trip when I was way older and many things in between. I take prizes seriously. So, I did what any logical prize-obsessed person would do when getting a “you won a prize” text. I reverse Googled the number every which way and (cue ominous music) it was a prize from a Mary Kay saleswoman.

It all came back to me then. She was wrong, we didn’t meet at the “4 h”; it was the Chamber of Commerce Expo. And it wasn’t about my chili at all. It was because we were standing next to each other and she would not let me leave the expo until I filled out her form to win a free makeover. I know that I absolutely, 100% need a makeover, but I also know absolutely, 100% that nothing is free.

I wasn’t even AT the expo, I was Working the expo, really just to help out a friend. Yes, he paid me, but not enough money for the expo stress. I forgot how truly debilitating an expo can be. We’ve all been in regrettable situations with expected protocols. On that day, I realized there are expo-type people who are there for the free samples and/or sales leads, and there are people like me, who are only at expos because they are doing a job.

Which is why I filled out the Mary Kay form. It was part of the process, part of the job. Expos never truly end until you fill out X number of forms. You fill out my form, I’ll fill out yours. I voluntarily gave over my data for a free cleansing cloth, a travel mug, chocolate chip cookies, pens, pens and more pens. I now have a much-needed lip moisturizer (I already misplaced it) and a keychain-sized hand sanitizer (I never use it). I was looking for an oven mitt or a dishtowel — I always need extras (get on that, expo people).

If I was an experienced expo-ee/er of any kind, maybe I would have known better than to willingly provide my real credentials. But I did, over and over. The lure of the prize is great: dinners, cruises, gift cards; sometimes all three in one drawing! (Good prizes do work, expo people.) And the not so great: analysis of any kind, makeovers of any kind, any freebie by the company offering it except perhaps by Amazon or Disney, but they’re never at the expo anyway. (Why not? Amazon, I ❤️ you now. But I can turn with a click. Someone smart said ABC. You can’t close me if you’re not there.)

Winning a Mary Kay makeover feels like a loss. Who wants to win a high-pressure sales pitch? I’ve never had an actual encounter with Mary Kay herself or her actual cosmetics. (Is she alive or dead? Dead, actually, I just checked.)I’ve never tried a single product except hand cream (unremarkable). I know one woman who sold it and said she spent more than she earned, quit and switched to drugstore line cosmetics. It seems this is more common than not and most of the actual buyers of Mary Kay are the representatives themselves. I still haven’t used my free facial cleansing cloth from the expo because I keep forgetting I have one.

Mary Kay Cosmetics is around longer than I’ve been alive. A multilevel marketing company founded by Mary Kay Ash in 1963, I’m sure they have something right about making money — they’re still at it decades later. Here I am writing about them and the saleswoman from the expo.

As I’m a woman “of a certain age” I’m always looking for a face product. Like, always. Looking. I’m as hopeful/naive as the next aging woman who wants the fountain of youth in a not-too-expensive bottle. (Don’t even get me started on shoes! We want comfortable stylish shoes for our aging/problematic feet and we want style, damn you shoe designers, we want style. Next blog.)

But no one likes to feel bullied especially if it’s dressed up like a prize. Mary Kay, your shit might be all that, but I’m just not going there. I appreciate the business was launched at a time when women were just starting to come into their own. The home party model made sense for oppressed housewives who were not only looking for income but for friends and a tribe to call their own. But Mary Kay &Co.: take note of where you’re standing in 2018. We’re well into the information age and there is absolutely no information out there that says Mary Kay Cosmetics is worth the price or the hassle. And buying Mary Kay is a huge, huge hassle.

In a point and click buying economy devoid of actual human interaction, it’s a stretch that anyone will subject themselves to unnecessary chitchat about benign subjects like skin cream. Try as you might, Mary Kay and the like, we’ve all moved past this sort of buying environment. MLM socials have been replaced by coffee shops, social media, and isolated togetherness.

Which brings me to the sales text. If you’re going to be so bold and text me a pitch, go forth with confidence and the right information. Know where you met me and why you can solve my problems. I have problems and my problems need solving. I don’t have a lot of money, but I do spend money on things other than bills — we all do. But don’t text me nonsense or you’ll be met with an emoji I’ve longed to use, and that’s just a waste of all of our time.

Or is it? Because maybe I can still be sold on Mary Kay. I’m having a bad face day every single day and I know I’m not alone. Give me some samples, links to reputable reviews and a seamless way to buy with little to no interaction with a salesforce and I can be sold on the dream of younger skin. But don’t rope me into a fake makeover and guilt me into a purchase so you can unload inventory. That’s bad business in an online world and says to me that what you’re selling is not even worth a chili🌶pepper emoji.